When it comes to interpreting, a simple question is: How do you demonstrate how well you speak a language? How can a hiring/contracting entity determine how fluent you are in a language combination?
From a linguistic standpoint, proficiency refers to one’s ability to use language for real world purposes to accomplish real world linguistic tasks, across a wide range of topics and settings. Specifically, for interpreters, a language proficiency test measures how well a personcan use the language to communicate in real life about real world tasks and activities.

A Language Proficiency test for interpreters should be performed using an externally validated test securely proctored and graded by qualified raters. The test should ideally be calibrated to a national or international scalewith recognized proficiency levels.

The resulting credential (a letter, a certificate or other document) attests the level of proficiency attained against the relevant scale. Anything different from a credential scored against a validated scale is of dubious validity.

Participants in The Community Interpreter will be required to complete a language proficiency test in each of the working language before receiving the TCI certificate upon successful completion of the 48-hour training.

The language proficiency test of choice has been developed by the American Council on the Teaching of Foreign Languages (ACTFL), and is delivered by Language Testing International (LTI) and currently proctored at Interpreters Academy™ offices.

Applying for the test: Participants will apply for the LPT when registering for the TCI.

Exemption: Only participants holding a degree in a specific language from an accredited university where that language was the language of instruction may be exempt from testing in that language.

Results: Certificates attesting the resulting language proficiency score will be received and sent within two weeks from the testing date.

Testing in More Than Two Languages: If you wish to test in more than two languages and have certificates attesting to your language proficiency in these languages, please call 720-291-6819 to discuss.

There are several recognized organizations that have developed such scales: 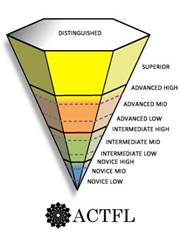 this scale has 4 main levels (Novice, Intermediate, Advanced, and Superior), the first 3 of which are divided into 3 sub-levels (Low, Mid, and High).ACTFL is more largely used than other assessments and offers testing in over 100 languages. It also has specific testing for measuring listening, reading, and writing proficiency. To learn more about how each level is assessed and scored, read on:

Interagency Language Roundtable Scale (ILR): Originally developed by the Interagency Language Roundtable, the ILR scale is largely used as the standard grading scale for language proficiency for Federal employees. The scale has 6 levels (0-5) and use a(+) sign to indicate when someone exceeds a skill level (reading, listening, speaking, or writing) but does not quite meet that level for other skills. 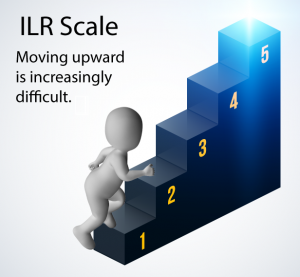 ILR does not administer tests. The government agencies that refer to the ILR scale actually create their own language exams for testing purposes. The Foreign Service Personnel, for example, runs their own language test that is based and scored against the IRL scale. However, IRL offers a speaking, reading and listening self-assessment that you can find here.

Common European Framework of Reference (CEFR): Designed by the 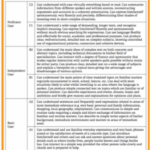 Council of Europe, CEFR is widely accepted as the European standard for grading language proficiency. The framework consists of 3 main levels, each having 2 sub-levels Like the ILR, the Council of Europe does not administer exams. Many universities and testing center around Europe run their own tests that are scored and based on the CEFR scale.

For a comparative analysis of the scoring levels: